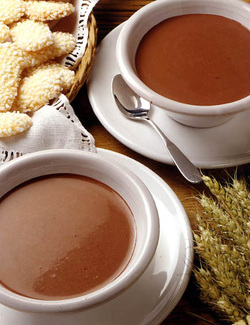 Most of us know that the Mayas and their ancestors were already gobbling unsweetened hot cocoa 2000 years ago. Some historians believe that we also have to thank the Jews – for introducing sweet, hot chocolate drinks to Europe. In fact, many Conversos fleeing the Spanish and Portuguese Inquisition ended up in South America in the early 1500s, where they learned how to grow and process the cocoa beans, which they started exporting to the Old Continent, together with cane sugar. Hot chocolate and coffee were both such a hit In many parts of Europe, that they put many wine bars out of business. In Venice alone, where the first coffee house in Europe was opened around 1645, some 400 (!) more sprouted in the next 150 years. However, while most could afford coffee, because it was imported directly from Arabia, chocolate (which came from the Americas and had to pass through many intermediaries) was expensive, and for a while it remained an exclusive habit enjoyed by the aristocracy, the wealthy merchants and the high clergy.   I hope I’ll make you feel just as fancy as you slowly sip a cup of this thick Italian-style cioccolata!

With Cocoa: Place the cocoa, potato starch, salt  and sugar in a small and heavy or non-stick saucepan. Add the milk very slowly, whisking continuously (use a whisk, not a spoon to avoid clumps). Move the saucepan to the stovetop, and bring to a boil on low heat, stirring continuously; allow to simmer for about one minute or until it thickens and serve accompanied by small cookies.
With Chocolate: use only  high -quality dark chocolate (at least 60 percent cocoa – the more, the merrier!); place  a saucepan with the chocolate  in a large pan of shallow warm water, and bring the water to a gentle simmer on top of a range until the chocolate has melted. Add the milk, sugar, salt and potato starch to the chocolate very slowly, stirring continuously; discard the pan of water and place the saucepan with the chocolate on the flame; on low heat, bring to a boil and allow to simmer until it has thickened to perfect creaminess.