Behind a tough, thorny covering, the artichoke hides a tender and fragrant heart. Through the centuries, this contrast has inspired a number of literary productions, from Greek legends to contemporary poetry. And with all due respect to my Israeli friends, the artichoke’s reputation  in this sense even precedes that of the “Sabra”! While we think of the artichoke as a vegetable, it is technically the edible and tasty bud of a flower, which makes it even more romantic – not to mention the satisfaction of finally eating something that it took us two hours and a couple of knife accidents to clean.

In Italy, we are all notoriously obsessed with local food, and we all insist that our particular regional variety is the best (note to my Roman friends: please don’t even bother to comment and criticize under this post, our differences on the topic can not be reconciled!). Italian Jews like me are possibly even more passionate than the others about this topic, given that until at least the 1800s in Northern and Central Italy the Gentiles would not go anywhere near artichokes, which were considered some crazy Jewish ingredient.

In Venice, we buy the purple artichokes that come from Sant’Erasmo, the largest island in the lagoon. In the spring, if you are lucky, sometimes you can find the cream of the crop, the first tiny artichoke to grow on each plant, out of more than one hundred: these are called  “castraure” (kas-tra-OO-reh), because they are “castrated” (cut off ) in order to encourage more to flourish. I have seen my fellow Venetians get into violent fights at the Rialto market over these treasures, which are prized for their relative lack of pricks and their tender, melt-in-your-mouth interior.

While it’s not the same as eating the real thing along the canals of Venice, you can find pretty good artichokes right here in the U.S (my favorites are the ones from Montrey County, in California). Ever since the Italian immigration wave in the early 20th century, artichokes quickly became popular, and started selling for a high price. In the 1920’s, even the mafia invested in them, and when Ciro Terranova, “the Artichoke King”, took the artichoke wars to such extremes as to terrify produce distributors all over the country, Fiorello La Guardia, the legendary mayor of New York, declared illegal “the sale and possession of artichokes” iin the City. The ban was lifted after only one week: it seems that La Guardia, himself the son of Jewish Italian immigrants, admitted that he loved the vegetable too much to prohibit it! 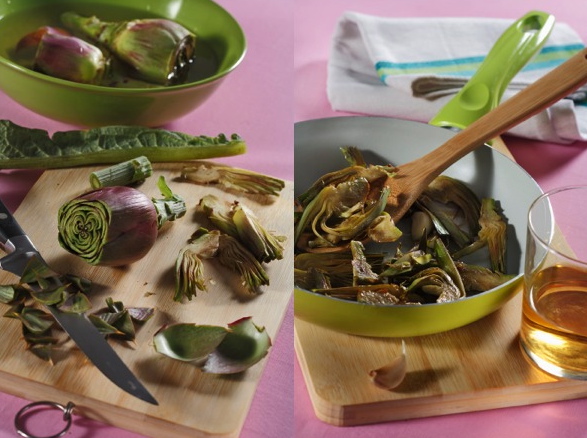 Sformato is a kind of savory custard, but fluffier, almost soufflé-like and usually including pureed vegetables. The name (sfohr-MAH-toh) means “unmolded” in Italian — from sformare, to turn out. It’s a very traditional recipe, found in many Italian regions and in most classic cookbooks, from “Il Talismano della Felicità” to “Il Cucchiaio d’Argento”. Tuscans, like my mom, are particularly fond of it and make it with every vegetable they can find!

Clean the artichokes, eliminating the outer tough leaves and the chokes. Slice them. In a saucepan, heat 2 tbsp olive oil with a thinly sliced shallot for 2 minutes. Add the artichokes and barely cover with water or vegetable oil. Cook for about 10-15 minutes or until soft and until the water has been fully absorbed. Adjust salt. Blend in your food processor until smooth.

Make the béchamel sauce: melt the butter in a heavy pot over low heat. Add the flour, whisking continuously to prevent clumps. Cook on low heat until the flour disappears into the butter, without letting the butter turn brow. Start adding warm (not hot!) milk to the mix, stirring constantly with a whisk. Bring the sauce to a simmer, add salt and pepper and keep whisking almost constantly for about 30 minutes, or until the sauce thickens. Taste, and add more salt, pepper and nutmeg to taste. If you still ended up with some lumps, strain through a sieve. Remove from the heat, cover with plastic wrap or aluminum foil, and allow to cool before combining with the eggs.

Whisk 2 eggs lightly in a bowl; stir in the béchamel sauce and artichoke puree and parmigiano cheese, and combine until smooth.

Butter the ramekins (you can use 6 6-ounce ramekins, or 4 larger ones, or 8 smaller. Baking time will vary depending on size). Dust with bread crumbs. Pour mixture into ramekins, and bake in a pre-heated oven at 350 F for about 25 to 40 minutes (depending on size), or until a light golden crust forms on top and the sformati are nice and firm. Allow to cool for at least 10 minutes, unmold and serve.