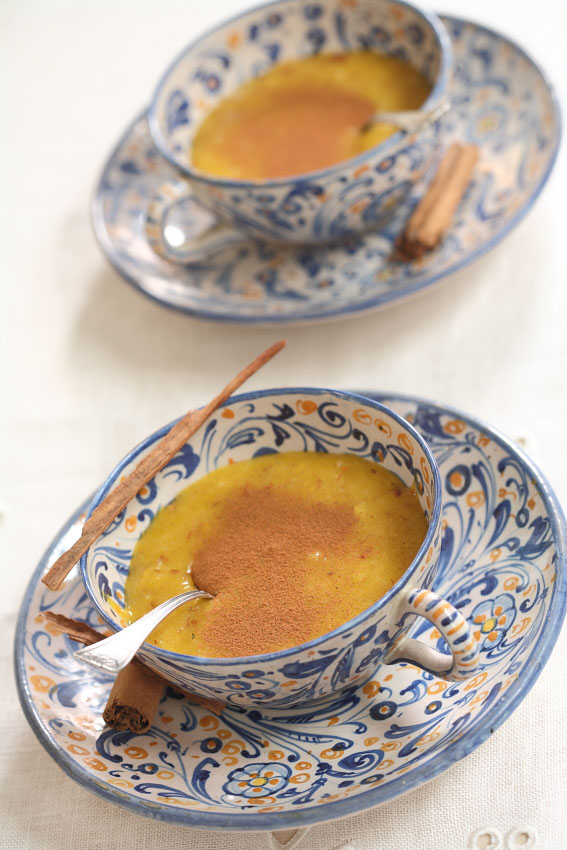 While eating matzah (unleavened bread) during Passover is a commandment, eating too much of it could turn into a curse. I won’t go into details here, but by the time you serve dessert at the end of the seder, you will be praying for a break. I will always be thankful for the fact that most Italian Passover sweets are not made with matzah meal (ground matzah).

These lovely almond custards from Leghorn, in Tuscany, are called “Scodelline” (little bowls) or “Tazzine” (little coffee cups) because of how they are served in individual portions. They are small and elegant, just what you need to end a holiday meal on a sweet note without overdoing it. They are also gluten-free, and easy to prepare with wholesome ingredients (isn’t it nice, when you are having all this sugar, to know that there is something nutritious mixed with it, like almond and eggs?) The Jews of Leghorn, drawing from their Spanish-Portuguese origins, make several interesting sweets with these, including the elaborate Monte Sinai, a macaroon-like almond cake covered with egg threads fried in syrup.

For the recipe, I turned to my friends Lea and Anna Orefice, mother and daughter, two inspiring generations of fabulous cooks. From her kitchen in Leghorn, Lea – who is 92 and still in charge of making dessert for the family seder – answered all my questions via email in real time while I was stirring my custard in New York City.  Here is the result, and the detailed recipe, including Anna’s microwave version in case you are in a hurry….. 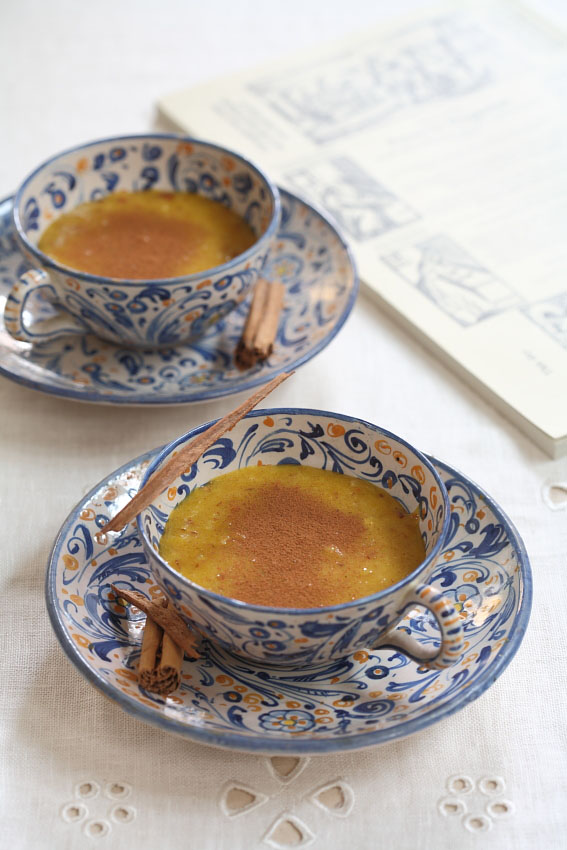 Place the sugar in a small pot, barely covered by water (more or less the same amount of water and sugar). Cook over low heat, stirring continuously, until it starts simmering and turns into a dense syrup. Do not allow it to brown and turn into caramel: as soon as it melts and thickens into a thick syrup, add the almonds and the flower water (or lemon zest), stir a couple more times and remove from the heat. In a separate bowl (I like to use pyrex) whisk the yolks until frothy. It will be easier with an electric whisk or mixer. Slowly pour the whipped egg yolks into the syrup until the mixture is smooth. Cook the mixture on very low heat in a double boiler (you can use the pyrex bowl on top of a pot filled with some water), stirring continuously until it begins to thicken (about 20 minutes) and the surface turns shiny, almost glaze-like. To save time, Lea’s daughter Anna uses a microwave instead of the double boiler: use about 25% less water; once everything is combined, place the pyrex bowl with the mixture in the microwave, and cook on medium for 4 minutes uncovered. Stir, and cook for 3 more minutes. Whether you used the double broiler or the microwave method, once the custard is cooked allow it to cool down, stirring occasionally, and once it’s lukewarm pour it into individual espresso cups (full) or tea cups (half full), and dust the top with some grated cinnamon. Serve accompanied by some fresh fruit. Using 6 yolks, you will make about 8-10 espresso-cup sized "scodelline"

My Leghorn-Style Red Mullet and some history