You are here: Home / Appetizer / Cous Cous salad with red Radicchio and Pomegranate 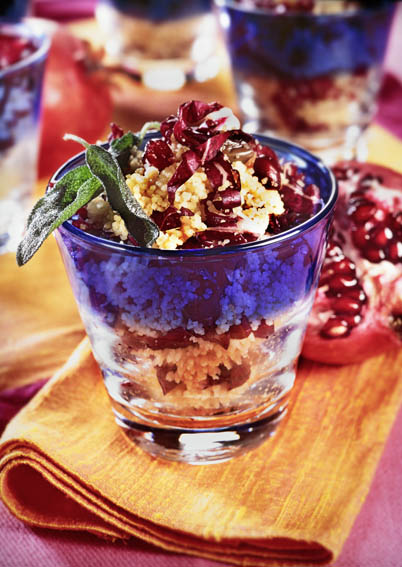 Cous cous is probably not the first dish that most of you will associate with Italy. However, if you look at a map, you’ll notice that Southern Sicily is not that far from North Africa, and the locals have been enjoying this type of semolina preparation since Roman times. Much farther North, on the coast of Tuscany, in the sea port of Livorno, “Cuscussu’ ” is also a favorite: first introduced by the Jewish merchants, who had ties in North Africa, it slowly spread to the rest of the population. Not to mention the Sardinian version, Fregola:  tiny 2-mm balls of semolina dough that have been toasted in the oven before being boiled like pasta. Let’s toast to “fusion” with this easy salad, which surprisingly pairs cous cous with a staple of my region, Veneto: red radicchio! 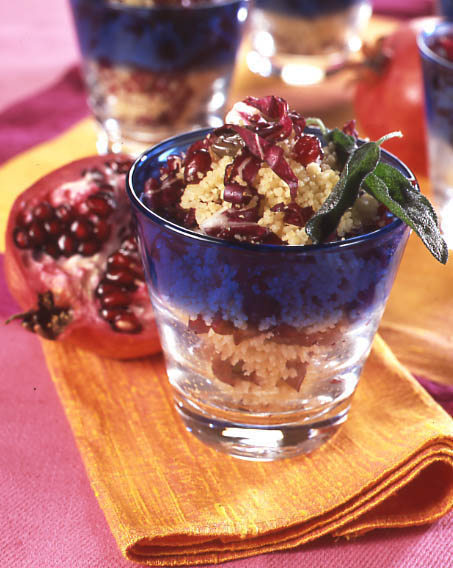 No need to cook the cous cous! Just place it a bowl with about 1/2 cup lukewarm water, 8 tbsp olive oil, and the juice of an orange, salt and pepper. Toss and fluff with a fork, add salt and pepper. let it stand for about 1 hour covered, adding about 1/2 cup to 1 cup of water every 10-15 minutes and re-fluffing each time with a fork. In less than an hour, the moisture should be absorbed and the cous cous should be tender, fluffy and light.

In the meantime, cut the radicchio into thin strips and peel the second orange. divide it into slices and also peel the individual slices (or at least eliminate the white membranes!) and cut them into pieces. Combine the radicchio, orange, olives and pomegranate seeds with the cous cous; Adjust salt and pepper,and distribute into 8 individual cups or bowls. Decorate with a few sage leaves fried in hot olive oil.